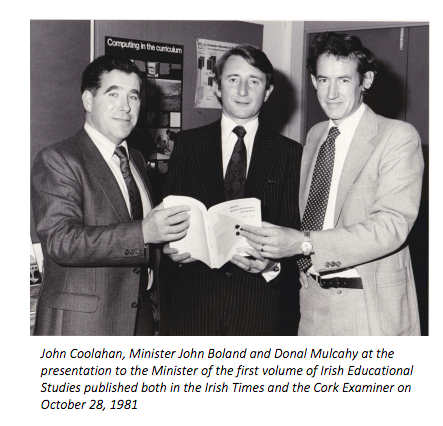 ESAI is delighted to announce that the ESAI Lifetime Achievement Award 2021 is Donal Mulcahy.

D. G. Mulcahy, CSU Professor Emeritus in the School of Education and Professional Studies at Central Connecticut State University, and formerly Professor and Chair of Education at University College Cork, is the 2021 recipient of the ESAI Lifetime Achievement Award in recognition of six decades of engagement and leadership in the association.

His relationship with the association dates back to 1976, where he proposed the idea of the association at a conference organised by Jim McKernan and John Marshall in University College Galway.

Donal’s blueprint for a national educational association was subsequently taken up by a working party which included John Marshall, Jim McKernan, John Coolahan, Sean O’ hEigeartaigh and which resulted in the organisation of a conference the following year at University College Cork at which a draft constitution was presented and adopted and the association formally founded.

A founding member of the association, Donal served on the executive for six years, and was elected president of the association in 1980, a position he held until 1982. Donal was the author of a number of seminal works during this period including Curriculum and Policy in Irish Post-Primary Education (Dublin: Institute of Public Administration, 1981) and Irish Educational Policy: Process and Substance (co-edited with Denis O’ Sullivan) (Dublin: Institute of Public Administration, 1989). He served two terms on the Governing Body of Thomond College and he was also the recipient of two Fulbright awards.

Donal left Ireland for Eastern Illinois University in 1989 after which he published Knowledge, Gender and Schooling: The Feminist Educational Thought of Jane Roland Martin (Westport, CT: Bergin and Garvey, 2002), The Educated Person (Lanham, MD: Rowman and Littlefield, 2008), and Gen Ed (Leiden and Boston: Brill Sense, 2021) among other works. His commitment to the ESAI did not wane, however, and he returned regularly for the annual conference, presenting papers and publishing articles in the association’s journal Irish Educational Studies. After a hiatus of almost four decades from the executive, Donal was re-elected to the executive in 2017.

Colleagues recall Donal’s passion for the association, his commitment to education as a discipline and to the philosophy of education in particular. Always scholarly, collegial and insightful, Donal set the highest standards for himself, his students and his fellow educationists. At the same time, Donal was always available to students and colleagues alike to share his wisdom and insight. A wonderful colleague, teacher, philosopher and mentor, Donal’s unique contribution to the ESAI will resonate for generations to come.

A number of colleagues have shared their memories of Donal

I am delighted to congratulate Professor Donal Mulcahy – the recipient of the 2021 ESAI Lifetime Achievement Award. I first met Donal at the ESAI conference in the University of Ulster, Coleraine in 1978. He had been one of the founder members of the ESAI two years earlier and for forty-five years he has continued to be associated with ESAI. His book Curriculum and Policy in Irish Post-Primary Education which was published in 1981 was the first significant analysis of curriculum policy in Ireland and I read it avidly at the time and was excited by the philosophical framework which it posited. In 1984 as a member of the Curriculum and Examinations Board and chair of the subcommittee charged with reviewing the Junior Cycle curriculum, I invited Donal to discuss with the committee how his philosophical approach could inform the junior cycle review and reform. I have enjoyed his many publications since that date.

I am delighted to salute and honour the work of Professor Donal G. Mulcahy, Distinguished Professor (Emeritus) who has been my friend, educational colleague and mentor since 1975. After the First Postgraduate Education Conference was held in Galway in 1976, organized by John Marshall and Jim McKernan with university support from Professor Eustas O Headain, it was Professor Mulcahy who offered leadership and support in requesting to hold the second meeting (after the successful Galway 76 Meeting) at University College Cork. It was there that Donal suggested that an Educational Studies Association of Ireland be organized. It is my understanding that the eight elected members of the Executive of ESAI co-founded the Association. Donal Mulcahy has been a warm, caring and inspirational colleague over all the years. What strikes me as special about Donal is his deep determination and care for educational studies in Ireland. In the tradition of Professor John Coolahan, Dr. Padraig Hogan, and other founder members who have continuously served-and those who have taken up this remit are also acknowledged. Professor Donal G. Mulcahy has been a persistent and faithful member constantly caring for, and encouraging, members of the ESAI. I understand that in his retirement he has served on the Executive Board. That is a ‘Champion’ for the ESAI. But there is one further character virtue I would like mention-it is his personal and unswerving loyalty and commitment to help the ESAI succeed. In fact, Donal was the principal person who arranged the ESAI Constitution. This man has a love for education, especially as witnessed by his many published books on education and policy in Ireland. I also now understand he has published a novel depicting a professor’s life in teaching. Bravo, Donal! On St. Patrick’s Day, 2021, you make all of Ireland and our international colleagues proud of Ireland, your stalwart work with setting up the Educational Studies Association and its internationally acclaimed journal Irish Educational Studies. We all owe a great collegial debt to you Donal. Your love for education is contagious; and we love you for this. I salute Prof. Donal G. Mulcahy as a true champion of Irish education.

I am one of a very small number of members of ESAI who was taught by Donal as undergraduates in Limerick back in 1973 and 1974, when he was Head of Education at Thomond College. Over that period one of my main areas of interest became education studies. I am in no doubt that I can attribute that primarily to the influence of a then very youthful Donal – he looked no older than many of us. We were delighted when he arrived on the scene to discover that not only was he from Cork City (which was almost a guarantee that he would be good humoured) but that following undergraduate and post-graduate studies in Ireland, he had studied for a Masters and PhD degree in education theory in the USA and had already been an academic there and in Canada. I remember him for many things; joining us students in the refectory for chats, playing basketball with us, and even occasionally asking us to push his car when it would not start. Above all else, however, he was an inspirational lecturer who instilled in me a great interest in history of education, philosophy of education and curriculum studies. Donal proved to be my saviour in my obsession with trying to establish in my head connections between all of the academic areas I was studying. After we both left Ireland in 1989 we lost touch with each other for quite a few years but reconnected through attending annual ESAI conferences at which it always a delight to catch up with him as his enthusiasm for education shines as bright as ever. Professor Tom O’ Donoghue Donal was my first educational theory lecturer at what was then the National College of Physical Education. I have many fond memories of that time and his significant contributions to my development as a reflective teacher and academic. Donal was about five years out from his own PhD at that time. He seemed a seasoned educational theorist even at that stage. I remember the written lecture notes on the lectern —no slides, power-point, or even overhead transparencies. He walked totally immersed in his ideas over and back across the front of the room providing what was to me and many others a fascinating narrative about some educational concept or theory. I used to sit enthralled at each of these sessions. The ideas were all new to me and I was totally captured by his ability to build an intriguing narrative and ask insightful questions during the story to ensure we engaged. I have recently enjoyed reading his novel Gen Ed and Dr Kelly (the protagonist in the book) reminded me very much of Donal at the height of his powers engaging students in Socratic pedagogy. In retirement, Donal was still full of enthusiasm for learning and for former colleagues and students. I have always appreciated his interest in and support for Irish education, Irish academics, and in my case for Physical Education as a critical part of a liberal education. As one of the original founders of the Irish Educational Studies Association, this recognition for Donal is more than deserving. Thank you Donal for all your contributions to Irish Education. You have left a marvelous legacy to those who follow in your footsteps.

I met Donal for the first time at the gathering of likeminded educationists which took place in UCG in 1975 at which the idea for the ESAI was first proposed by Donal. He was a Senior Lecturer in the Department of Education at UCC. The papers read were subsequently published in the “Proceedings” of that conference. At this Galway meeting it was decided, given Donal’s strong advocacy, to hold another conference in UCC during the following year (1976) and before this the possibility of forming an association for educational research would be explored. Thus, Donal was centre stage in the founding of the ESAI. My strong memory of Donal at the Cork conference is of an enthusiast driven to involve the press in what he saw (rightly) as a historic educational development in Ireland. I can still see him in the Science Building of UCC at the pay phone putting forward in the strongest words the importance of this new development. In those days “the press” almost certainly meant the Cork Examiner and the Irish Times. I doubt if he had the small change to ring any more! In 1980 I was appointed as a College Lecturer in UCC and thus worked closely with Donal who was now the Professor of Education. His position as Professor, his research and his teaching were all used to further the aims and objectives of the ESAI. His support and enthusiasm have never waned throughout the years. In my view he is a very worthy recipient of this award. Professor Francis Douglas I remember attending ESAI for the first time in 2012 at the 40th anniversary of the organization’s inception. It was a great honor for me to finally be a part of the organization. I was delighted to partake in the 40th anniversary of the conference along with my sister, Cara and my wife, Judith Madera, who also gave papers. My dad always maintained a strong connection to ESAI and the many people involved not only in its creation, but also those who continued to ensure its longevity. I met many of the old guard through the conference, people whose names I had heard for years and even remember as a child. In particular, Jim McKernan, Tom O’Donoghue and Johnny Coolahan come to mind. Dad believed that organizations such as the ESAI were vital to a vibrant and evolving academic and philosophical landscape.

Watch a video of the presentation of the award here